The Ammit 25 is a larger version of the original Ammit, with several distinct improvements. Compatible with higher wattage of up to 70w and a performance boost in both vapor and flavor production. Its unique three-dimensional airflow produces brilliant and unrivaled flavor. The enormous build deck and post holes allow for an easy building experience.

The Vandy Vape Govad RTA is a medium sized tank atomizer that has the ability to be used as either a 2 mL or 4 mL tank depending on user preference. Its design adopts a bottom, three dimensional side airflow control system that channels air directly to the coils for maximum flavor production. The unit supports both single and dual configurations and has a wide bore drip tip for more comfortable vaping at higher temperatures. 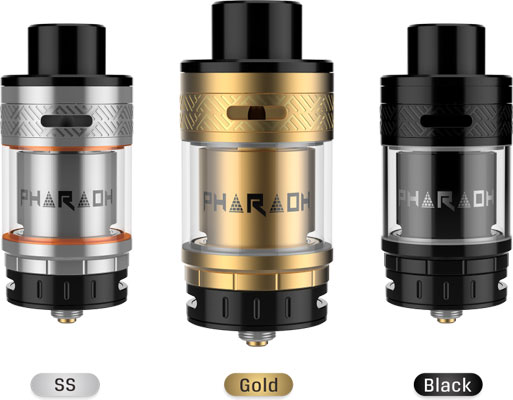 Pharaoh RTA, with 25mm diameter, is an innovative tank designed by Rip Trippers, who previously designed the Pharaoh Dripper Tank.
We all see how popular the Digiflavor Pharaoh Dripper Tank was during last year, 2016, and we can expect the same thing to this newly released Pharaoh RTA.  Features a unique dual bridge clamp post build deck that is designed for both single and dual coil builds. Single coil builds truly shine on the Pharaoh RTA due to the ample build space available. The Pharaoh RTA features a large 4.6ml e-Liquid capacity that can be expanded to a truly staggering 8.1ml e-Liquid capacity with the included expansion tube.